A rare archive of ancient seeds harvested by American Indians are preserved — and planted — at the Science Museum.

The drawers in the seed archive of the Science Museum host a variety of rare vegetables — some hundreds of years old. 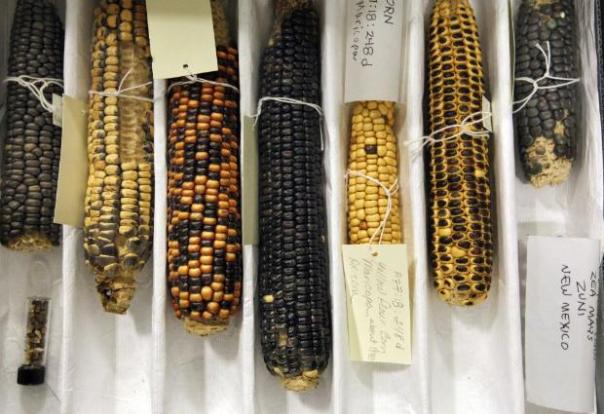 Deep in the bowels of the Science Museum of Minnesota sits a stash of ancient dried vegetables that few people have ever heard of, let alone tasted. There are beans of all shapes and sizes, quirky, squatty squashes and a dazzling array of “Indian corn” — not just the familiar “calico” variety but a rainbow of ears and kernels in blue and black, red and gold, representing the diverse tapestry of tribes that once grew them. The unusual archive of rare seeds is not open to museum visitors, but you can see some of its offspring growing in the Ethnobotany Project Garden in the museum’s Big Back Yard. “These seeds aren’t meant to be in a drawer in a museum,” said Scott Shoemaker, ethnobotanist (the study of how people make use of indigenous plants). “We want our project to contribute, to give back.”Shoemaker got interested in indigenous plants after discovering a generational “gap of knowledge” in his own tribe, the Miami Nation of Indiana. Elders, including his great-great-grandfather, knew the medicinal uses of native plants, but that knowledge was dying out, along with other tribal traditions.After World War II, when his tribe stopped growing their own corn, their native language faded into dormancy along with it, he noted.”Seeds are part of a much bigger thing,” Shoemaker said. “They’re part of everything else that makes indigenous people who they are.”Setting up a seed bankEven though most of the seeds, seedheads and petrified veggies in the archive are decades old, donated about 35 years ago by a private collector, they’re not dead artifacts. They’re living specimens, carefully preserved in hopes that future generations will be able to plant them and harvest their fruits.”We’re trying to add to the body of knowledge,” said Jackie Hoff, director of collections for the museum.To that end, the museum is working cooperatively with several American Indian organizations to germinate, grow and harvest seeds from its collection. Shoemaker also hopes to develop a “reciprocal seed bank” to redistribute heirloom seeds to native people.

Heirloom corn has a lot to offer modern food consumers, he noted. In addition to fuller flavor, heirloom corn tends to be more nutritious than today’s commercial corn, which is grown primarily for carbohydrates and sugar, according to Shoemaker. “Some of the [heirloom] seeds have been tested, and they were a lot higher in minerals than modern seeds,” he said.

The Ethnobotany Project has even sent seeds into space, aboard last year’s shuttle Atlantis, to test the extent to which germination will occur in a microgravity and soil-less environment.

The seed archive and the research activity it has inspired are unusual, according to Shoemaker. “I don’t know of other museums doing this.”

Most of the seeds in the collection were gathered by one man: Twin Cities dentist and amateur anthropologist Wesley Hiller. Hiller’s fascination with ancient indigenous plant species spurred him to travel the Great Plains, the Great Lakes and the Southwest, collecting ancestral seeds from native people and archaeological digs and carefully cataloguing his specimens. Starting in the 1930s, he spent years building the collection, which was donated to the Science Museum in 1977.

Hiller’s seeds continue to get kid-glove treatment at the museum, where the archive is maintained in a carefully controlled environment. “They have to have a consistent temperature, under very tight controls — plus or minus only 2 degrees [Fahrenheit],” said Hoff.

Each specimen is numbered and tagged, and when seeds are planted in the project garden, it’s under strict “deaccession” guidelines (a museum-world term that refers to controlling how items in a collection are removed from the collection). At the Science Museum, no more than 10 seeds per species in the archive are planted at a time.

The garden has three sections, each demonstrating different Indian agricultural traditions. There’s a “Three Sisters Garden,” a companion-planting method in which corn, beans and squash thrive together in a symbiotic relationship. The tall corn provides a trellis for the climbing beans, which fix nitrogen in the soil for the corn and squash. Meanwhile, the broad leaves of the squash shade the soil and preserve moisture for all three plants.

Museum visitors also can stroll through a medicinal garden, designed in the shape of a turtle and divided into four quarters, devoted to men’s, women’s, children’s and general health. (The “women’s garden,” for example, includes prairie smoke, a plant believed to ease inflammation of the ovaries, among other ailments; the “men’s garden” includes a type of cactus with a prickly, stubbly exterior and an aloe-like gel inside, good for soothing burns and scrapes.)

Finally, there’s a Changing Gardens Through Time, showing how food-growing along the Upper Mississippi River has evolved over the past 2,000 years.

The museum is committed to maintaining the integrity of its seeds, Shoemaker said. “We’re not against manipulating seeds.” Indian tribes have long practiced cross-pollination, by trading corn and spreading genetic diversity that way, he noted. “But we don’t want this corn ever associated with GMO [genetically modified corn]. That’s not being responsible to history or to the people who have these traditions.”