Last month, on a farm below Mohawk Mountain in Goshen, Connecticut, a 30-pound bull calf was born to Bison #7. The calf is white and extremely rare — it’s said that the chances for having a white bison are one in ten million — and the calf’s birth is being hailed as an auspicious event.

Marian White Mouse of Wanblee, South Dakota, is planning to fly with her family to Connecticut for a July 28 naming ceremony that will likely draw crowds and could last for four days. White Mouse is a member of the Oglala Lakota people and, as she tells the New York Times, 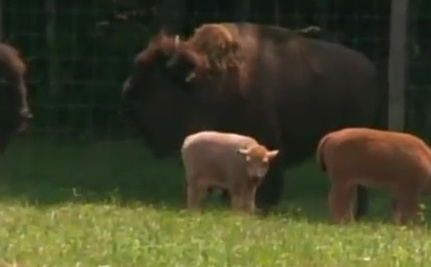 A white bison was believed to be a manifestation of the White Buffalo Calf Maiden, or Ptesan Wi. She is revered as a prophet, who in a time of famine taught the Lakotas seven sacred rituals and gave them their most important symbol of worship, the sacred pipe.

“They are very rare, and when a white bison is born there is a reason for each one to be here,” Mrs. White Mouse said. “It’s such a blessing for someone to take care of a bison like Peter Fay will. I told him when it was born, ‘You don’t even know what you have on your hands here.’ ”

The farm’s owner, Peter Fay, said that, based on research of the calf’s mother and father, he is sure that he is all bison, “without any intermingling with cattle.” To be sure, Fay has sent DNA samples for testing.

Keith Aune, a senior conservation scientist with the Wildlife Conservation Society, noted that some white bison are indeed albinos and struggle to survive in the wild as “they lack the black skin that absorbs sunlight during harsh winters.”

Earlier this year, a white bison was killed in Texas in what some believe was a hate crime against Native Americans. Fay says he himself or someone else watches the field where the calf is day and night.

Just weeks before the birth of the bison, the Senate introduced the National Bison Legacy Act, which would designate the bison as the US’s “national mammal” (no animal has yet been such). There are currently 15 co-sponsors, including Connecticut’s two senators.

There are now about 500,000 bison in the US, thanks to conservation efforts in the West and commercial demand. But once there were perhaps some 40 million, until they were nearly hunted into extinction: Certainly the birth of the white bull calf last month is, at the very least, a sign of hope.

END_OF_DOCUMENT_TOKEN_TO_BE_REPLACED

Chaos or Awakening on Mother Earth ? We are creating our own Karma.

BACKGROUND | INDIAN IN THE MACHINE

There is much seeming chaos taking place across the World as those who are awakening begin to ask questions and take responsibility for their own actions and deeds. It is a time of disillusionment for many and many are seeking answers for a better way. Tempers flare as each person goes through their own cleansing process, not understanding what is occurring on their Planet and in the Cosmos. It behooves those who stand as Light Beacons to maintain peace and calm no matter how intense the reactions in those around you.

Continue to practice your spiritual disciplines which uplift and inspire you to move forward in the attainment of your spiritual goals. Practice random acts of kindness and showing compassion to all. It is a most trying time for the masses of Humanity who are beginning to look around them and wonder what is really going on. The frequent weather changes and anomalies which leave no one untouched are not the usual expectation for so many and so the seeking for answers begins. You who are awake and aware must remember how it was for you in the beginning of your quest for clarity and answers to the enigmas of life.

Keep your sights set on your ascension and create the life you choose. There are endless possibilities and probabilities for each one of you. Choose that which aligns you with your Higher Self and your own Divine Plan and this will always keep you on the path most appropriate and right for you. If you are not feeling joy often, then what you are doing needs adjustment and the leaving behind of all that no longer serves your emerging Self and sometimes this deeper look within is not pleasant to endure. Keep in mind that you are not alone in this, Dear Ones, and this can bring more tolerance in all situations.