Soul Mates ~ When The Love Begins

Among the Sheepeater Shoshone, there are three kinds of souls. The first of these is the suap or “ego-soul” which is embodied in the breath. The second is the navushieip or “free-soul” that is able to leave the body during dreams, trances, and comas. It is the navushieip that encounters the guardian spirit that becomes one’s ally during life. Finally, there is mugua or “body-soul” which activates the body during the waking hours.

Among the Sheepeater Shoshone, if a person was sick because the soul had fled, then the medicine person went into a trance to search for the soul. If found during the trance, the soul could be restored to the body and in this way the sick person was restored to health.

Among the cultural traditions of the Atlantic Northeast, humans were seen as having more than one soul. Among the Narragansett, for example, there was one soul that worked when the body was asleep and another soul that would leave the body after death. When the body was asleep, the dream soul-Cowwéwonck-would roam, often appearing as a light, and seek out guardian spirits. The other soul-Míchachunck-was located near the heart and was the individual’s animating force.

Among the Huron, each person has two souls: one of these souls animates the body and one soul extends beyond physical activities. In sleep, one soul communicates with spirits and with other human souls. When this soul returns to the body, dreams are the way in which the soul’s experiences are communicated. From a Huron perspective, it was essential to reenact these dream adventures in order to unify the two souls and make each person whole again. The failure to do this would result in serious illness which could impact the entire village.

According to Anishinabe (Ojibwa, Chippewa) spiritual teachings, human beings have two souls, one of which travels at night and lives the dreams. With two souls, human beings can communicate with both the spirits and the souls of non-human persons. Chippewa elder John Thunderbird explains it this way:

“Your soul dreams those dreams; not your body, not your mind. Those dreams come true.”

He also points out:

“The soul travels all over the world when you dream.”

Around the world, many religious traditions teach that after death the soul is reincarnated. Among the Indians of North America, the concept of reincarnation is found in many tribes. Sioux physician Charles Eastman writes:

“Many of the Indians believed that one may be born more than once, and there were some who claimed to have full knowledge of a former incarnation.”

“He asserted very strange things, of his own supernatural knowledge, which he had obtained not only at the time of his initiation, but at other times, even before he was born. He said he knew that he had lived through two generations; that he had died twice and was born a third time, to live out the then present race, after which he was to die and never more to come to this country again.”

Among the Lenni Lenape, some babies are the reincarnation of former relatives. After birth, old women will examine the baby to check for signs that the baby has lived before. These signs include keeping the body relaxed and the hands unclenched and reacting favorably to places and things associated with the dead relative.

Among the Mandan, reincarnation was accepted and it was felt that the child chose its mother. The Mandan also had four souls, the principal soul being seen as a shooting star. At death, this soul could be seen in the sky.

With regard to death among the Gitxsan, Shirley Muldon writes:

Among the Hopi, the spirits of children who die before they are initiated into a kiva return to their mother’s house to be reborn.

As mentioned above, the Huron feel that each person has two souls. After death one soul stays near the corpse until after the Feast of the Dead and then it is released so that it can be reborn. Some of these souls are resurrected in name-giving ceremonies. The other soul goes to the village of the dead after the Feast. 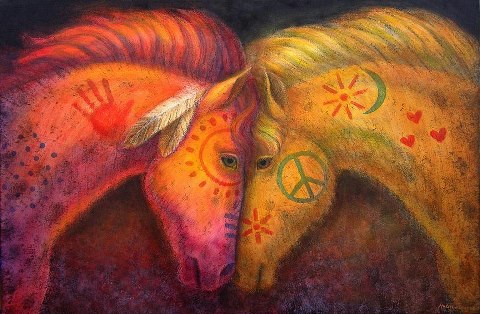