Many people are under the mistaken impression that crows were viewed as harbingers of death in Native American cultures, but in fact, that is not true at all. We do not know of any Native American tribe in which crows were seen as omens of death. Indeed, just the opposite, seeing a crow was (and still is!) considered good luck by many tribes. It is true that crows will eat carrion, but so do many other animals not typically associated with the dead such as bald eagles, bears, etc. In Native American folklore, the intelligence of crows is usually portrayed as their most important feature. In some tribes, the crow is conflated with the raven, a larger cousin of the crow that shares many of the same characteristics. In other tribes, Crow and Raven are distinct mythological characters.

Crows are also used as clan animals in some Native American cultures. Tribes with Crow Clans include the Chippewa (whose Crow Clan and its totem are called Aandeg), the Hopi (whose Crow Clan is called Angwusngyam or Ungwish-wungwa), the Menominee, the Caddo, the Tlingit, and the Pueblo tribes of New Mexico. 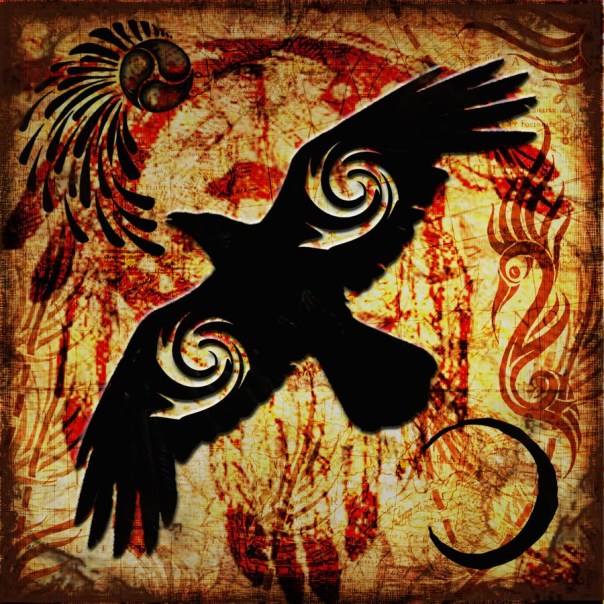 Excerpt from a book written by James Alexander Throm called: The Red Heart.

“The Rainbow Crow was beautiful to hear and to see, back in the days when it never got cold, back in the Ancient Days, before Snow Spirit appeared in the World.

When the Snow Spirit did appear, all the people and animals were freezing and a messenger was selected to go up to kijilamuh ka’ong, The Creator Who Creates By Thinking What Will Be. The messenger was to ask The Creator to think of the World as being warm again so that they would not all freeze to death.

Rainbow Crow was chosen to go and he flew upward for three days. He got the Creator’s attention by singing beautifully, but even though he begged the Creator to make it warm again, the Creator said He could not, because He had thought of Cold and He could not unthink it. But He did think of Fire, a thing that could warm the creatures even when it was cold. And so He poked a stick into the Sun until it was burning, and the gave it to Rainbow Crow to carry back to earth for the creatures. The Creator told Rainbow Crow to hurry before it burned all up.

Rainbow Crow dove down and flew as fast as he could go. The burning stick charred all of his beautiful feathers until they were black and since he was carrying the stick in his beak, he breathed the smoke and heat until his voice was hoarse.

And so the Rainbow Crow was black and had an unpleasant cawing voice forever after, but all the creatures honored him, for he had brought Tindeh, fire, for everyone to use.

The Crow is to this day, still honored by hunters and animals, who never kill it for food…and, if you look closely at the Crow’s black feathers you can still see many colors gleaming in the black.”