ONE HALF MILLISECOND TO MIDNIGHT 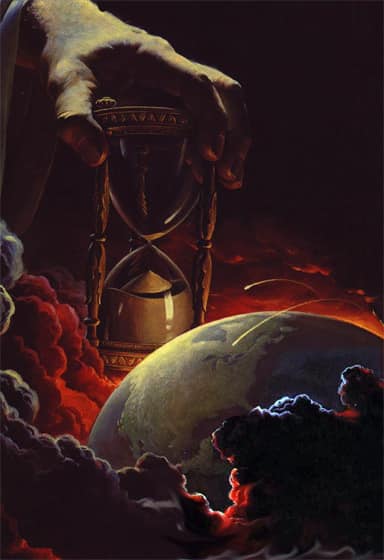 Plastic action figures for kids should have one arm melted off to symbolize the effects of climate change. Your server at a nice restaurant should sprinkle sand in your soup du jour to remind you of the disappearance of fresh water. Ice cream should be exclusively served melted to symbolize rising temperatures. Hamburgers should cost $200 to compensate for the global emissions of factory farming. And every time you go ice skating someone should punch you in the face and yell, “Enjoy it while it lasts!”

We have less than a millisecond left.

The International Governmental Panel on Climate Change says the point of no return is the year 2030. This obviously doesn’t mean everything spontaneously combusts at the stroke of midnight 2030 (although that would be fascinating to watch). It means that after that point—if we aren’t living vastly different lives—no effort will change the fact that the planet inevitably will become uninhabitable and we humans inevitably will go extinct and there inevitably will be no more skiing (both due to a lack of snow and due to a lack of fleshy beings to ride on skis). The year 2030 is the point of no return. It is the date of our impending, prolonged suicide.

WE SHOULD BE THINKING ABOUT NOTHING OTHER THAN CLIMATE CHANGE

Posted on June 25, 2019, in Uncategorized and tagged Climate Change, Minutes To Midnight. Bookmark the permalink. Leave a comment.